The Space Sector to be bigger than the oil industry

Space Industry Value – Why the Space Sector is THE future.

Innovation, commercialisation and the dawn of the New Space era has meant more than ever before: Space is big bucks.

The oil industry currently contributes nearly 4% of the global economy. In 2019 the total revenues for the oil and gas drilling sector came to approximately $3.3 trillion. In less than 30 years, the space sector is estimated to rival that figure and be worth over $3 trillion by 2050.

Space has proven to be one of very few sectors where growth has remained resilient through the world-wide recession.

Like the oil industry, the space sector is segmented into ‘upstream’ and ‘downstream’. Within both industries ‘upstream’ concerns itself the exploration; with oil that’s finding, drilling and extracting, in space that’s exploring the outer regions of the universe and innovating more economic ways to propel ourselves beyond our Earth’s atmosphere.

‘Downstream’ deals with refining and marketing the final product. The ‘final product’ in oil can be anything from plastics to petrochemicals. In the space industry, it’s the refinement and utilisation of data, research and information. Both exploration and refinement drive these industries forward, however only one of them is part of an industry that is ‘ever expanding’.

It’s well known that oil is one of the most important finite commodities in the world. When refined it’s the main energy source used in cars, planes, heating and electricity. Used in plastics, paints, chemicals, tape and so much more, our lives are made easier with this refined product; but think for a second how much easier life is because of satellite data. From location data to television channels, weather data to GPS, communications, forestry planning, natural disaster prevention, security and more – our every day lives use space technology all the time and we don’t even think about it…

The media darling of the space industry is Space Tourism. Enjoying more column space on average than any other part of the sector, everyone from Prince William to Bill Gates have aired their opinion on the value or disadvantages therein, but in reality, this forms a very small part of the industry. It receives such a focus because of the high profile nature of those funding it; primarily Musk, Branson and Bezos: founders of the New Space market.

For the most part, Tourism is a means to fund other more humanly beneficial parts of the sector, and as a whole is the driving force for sector growth. It garners attention form some very wealthy investors providing a gateway to other investment opportunities – but it’s not the be all and end all of space industry…

The term ‘New Space’ refers to the increasing commercialisation of space and the privatised funding of organisations with an interest in space and space technologies. The days of governments underwriting space efforts, at least in the US, ended largely in the 1970s. Money from government space agencies like NASA will however continue to play a part through SBIR grants, contracts to small suppliers and direct investments.

For example, SpaceX launched astronauts to the International Space Station last year in a world first, providing the service as a private company; where before NASA organized its own astronaut launches.

” One day, space travel will be as everyday as the weather report” – Jeff Bezos, Blue Origin Founder

Making space travel an everyday occurrence is the aim of Blue Origin Founder Jeff Bezos, who alongside rival Richard Branson took to the skies in 2021 in their own supersonic sub-orbital private rockets. It’s ushered in a new era of space travel in which billionaire-backed companies offer the high-flying excursions to anyone who can afford it.

Passenger flights are without a doubt moving ahead quickly, but with far smaller, non-human payloads, the stakes are smaller and the path easier to tread. The smallsat launch arena has dozens of companies looking to launch small payloads at reduced prices and with easier regulations and insurance costs, the barriers to entry are lower and attractive to new entrepreneurs – and private investors.

The global propulsion market is expected to more than double in size by 2025 to an estimated 14.2 billion and of course none of this would be possible without the technological advancements necessary to take these objects into LEO and beyond. Companies from Scotland to New Zealand are developing and launching rockets that can send small satellites into orbit. Among them are companies such as:

* Firefly Aerospace who are developing a rocket capable of orbiting 2,000lb to LEO

Likewise we see the rise of other companies developing solutions to expedite the progress of the industry.

* NanoRacks have developed a standardised interface between satellites and the rockets they travel on.

* Made In Space are developing 3D printers to print habitats and components in space utilising materials found on the lunar or asteroid surface.

The urgency for data is at an all-time high. 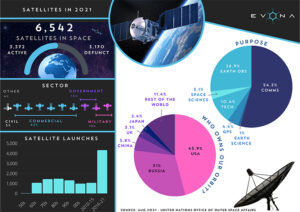 As of Aug 2021, there were over 6,500 satellites orbiting the Earth, and in the last 5 years we’ve sent more satellites up into space than the preceding 32 years. As it stands, the majority of those have been for the commercial sector and their purpose has been largely to better communications. The US, Russia and China are currently the major owners of these satellites; accounting for nearly 3/4 of the equipment in orbit.

Once as large as a bus, satellites can now they can be as small as a loaf of bread or a mobile phone; the smaller they get, the cheaper they are to launch, which explains why satellite miniaturisation is a booming industry, and this advancement has driven the exponential growth of the satellite launches in the last 5 years.

Space is not just the satellites that orbit the Earth sending back pictures and other information about the state of the world, though. How the satellites’ data is retrieved has grown over the decades and with it the potential roles available.

The ground stations that link the spacecraft with the world’s telecommunication networks are advancing in technology alongside the ever growing number of satellites in orbit. The amount of data coming from satellites will increase enormously over the next ten years, and to cope, companies will need to evolve to create new ways to transfer this data from space at speed. The ability to support multiple communication links at the same time will drive down the cost of data transfer. This coupled with more efficient propulsion techniques, with lighter, smaller payloads as well as reusable technology will make missions more financially viable. As innovation drives down costs we’ll be able to explore our universe more efficiently and access to it will be more accessible.

Beyond the long-standing space faring nations of the USA and Russia, China now boasts human spaceflight capabilities and India has taken an active interest in planetary exploration. Countries such as the United Arab Emirates are also investing heavily in space development technologies; you don’t have to live in the USA to have an outstanding career in the space sector. The UAE, where 30% of their GDP is contributed from the oil industry, are now actively looking to diversify into space technology to help shred the hydrocarbon dependence.

If you weren’t already aware of the UAE’s ambitious space plans, you soon will be. Hot on the heels of their Astronaut Programme, which saw the launch of their first Emirati Astronaut to the ISS in September last year, the country launched the Hope probe in July last year, a project six-years in the making. At the same time the country set up the Middle East’s first space research centre and announcing the ‘Arab Space Pioneers’ programme. Overseen by the UAE Space Agency, the programme equips talent with the skills and expertise required to expand career prospects in the growing space sector to actively contribute to the global space community. The programme highlights the importance of investing in the multi-faceted space technology as a major driver of the future knowledge-based economy as they actively look to ease their economic dependence on oil.

Britain is a relative small contributor to the space sector with revenues of £5.9billion in 2007, doubling that by 2018 but for the modest investment the UK has the second largest collection of space businesses on its shores after the United States. And, some seriously big plans to become a significant global player in the years to come, aiming for a market worth $100billion by 2030, or 10% of the global market.

With a notable foothold in the satellite manufacturing industries, the UK has invested £40 million to grow its spaceflight capabilities and is funding vertical launches from a spaceport in Scotland and horizontal launches from Spaceport Cornwall. Watch this space.

What job roles exist in the space sector? 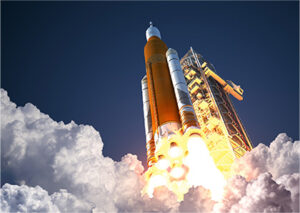 The projected growth of the space sector that will see it surpass the oil industry in value will rely on attracting individuals with transferable skills from outside the sector, nurturing the talent within and demystifying the sector to appeal to the future space workforce of tomorrow. Specialist space recruitment companies like EVONA are working to connect these dots and facilitate the sustainable fast-paced growth of the sector.

It is software enabled services that process this data, the spacecraft that provide it and the launch companies that orbit the satellites who need people who want to make the world a better place. Spend your day studying imagery sent back by spacecraft, oversee data quality systems, advance propulsion technology, make satellites lighter and smaller, examine markets for new satellite service applications, there is a wealth of untapped opportunity.

Your skills are far more transferrable for this sector than you think, an industry which has traditionally been seen as one only for people in white coats; take the opportunity many have not realised is possible. Marketing, team building, international cooperation, negotiation, design, communication, simulation, production, there is a great deal for people to realise their potential once they look at what is on offer from the space sector. Many of us who may not have considered a career in space will soon find that our skills are in demand from a myriad of space corporations could your next small step in your career actually be a giant leap? EVONA think so, and they’re already looking out for your next job opportunity in the space sector.

What was once deemed beyond the capabilities of your career are now well within your reach – EVONA can get you there; launch your career into space and go further than you ever imagined.

* Valuation of the Oil industry at 3.3 trillion USD from source Investopedia – According to market research by IBISWorld, a leading business intelligence firm published Feb 2020.

* Analysts at the Bank of America Merrill Lynch predict the sector will surpass $3 trillion in 30 years.