Women in Space: What you Need to Know

Space Exploration and life beyond earth have excited people for centuries, however, did not become possible until after WW2. There was significant technological and engineering advancement during the war, which led to the production of the German-made V-2 rocket in 1942-1945. V-2 became the first artificial object to travel into space by crossing the Kármán line on 20 June 1944 which eventually led the way to space flight and exploration later on in the Century.

The story of the first man on the moon is one that many know after Neil Armstrong took the first human steps on the moon in 1969.  Yet to this day the first woman has still not landed on the moon, however, after NASA published plans for the Artemis mission in 2024 we are seeing the likelihood of this first becoming a reality 55 years later. Hiring for Space and the space sector becoming more inclusive than it has ever been, we take a look back at the history of women in space and the contributions made to the sector by influential women.

At this time traditional gender roles and conformity governed the way a woman lived in the 1950s with the Cold War ideal of domesticity being reinforced in messages produced by the media. Whilst there was advocacy for change stemming from the suffragette movement in 1903 and a growing disdain for compliance to traditional gender stereotypes, this was still not reflected widely in society, the Space Sector included. All areas of the industry had a limited representation of women, even though the first woman launched into space took place in 1963, the progression after this point was slow. To this day only 11 percent of all people that have been to Space are women and beyond that, the representation of women in STEM (Science, Technology, Engineering, and Maths) which is a vital part of the sector still only sits at 22 percent. 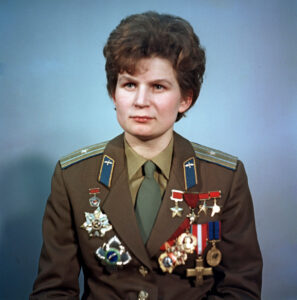 Regardless of cultural norms at the time, many would be surprised to know that consideration for women to be involved in the space sector was prominent right from the beginning. Even before the Apollo launch, a New Mexico physician called William Randolph Lovelace II suggested that women would be good candidates for space travel. These ideas however were not back by the feminist ideals we now have in place today and were more so fuelled by the suggestion that aboard these space stations there would be a need for pink-collar jobs. Lovelace’s vision of human societies in space saw women in roles such as a telephone operator, nurse, or laboratory assistant, therefore, making his suggestion less visionary and more in accordance with his time, unlike the space job opportunities available to women now.

Lovelace, as a physician, oversaw the psychological and physical testing for the first corps of astronauts. Thirteen female pilots underwent Lovelace’s testing to become potential astronauts, including accomplished pilot Jerrie Cobb. Cobb held world records for flying and argued that there was no reason women should not be allowed into the astronaut corps, she went on to testify this before Congress in 1961. However, the ambitious timeline to get a man on the moon due to the USA’s involvement in the Space Race against the USSR meant the speed required could only allow for already trained pilots to be involved, all of which were men. With women nowhere near the astronaut corps by 1961 and any focus on including women in spaceflight were put on a backbench by NASA.

Who was the First Woman in Space?

The 16th of June 1963 marks the day the first female made it to space, the 24-year-old Soviet cosmonaut was Valentina Tereshkova. As a skilled skydiver and parachutist, completing 126 jumps, she was selected from over 400 other candidates to undertake the 70-hour solo mission aboard the spacecraft Vostok 6. Following selection, Tereshkova and four other female cosmonauts underwent 18 months of gruelling training with the Soviet Air Force before the expedition. During this time she participated in several tests including those that determined how she would react to extreme gravity conditions, zero-gravity conditions, and long periods of isolation. Of the five women in training, only Valentine Tereshkova made it into space.

The expedition itself was a dual mission and two days before Tereshkova launched, fellow cosmonaut Valeriy Bykovsky set off in Vostok 5. Each spacecraft took a different orbit path and they actually came within 5kmof each other at one point in the flight. During the 70 hours spent in space, she orbited the earth 48 times. However, the flight was not as smooth sailing as previously thought, classified information was kept secret till 30 years after the flight and documented an error in the spacecraft’s automatic navigation software which could have ended in tragedy. The error in the re-entry settings would have caused the ship to begin moving away from the earth instead of re-entry to earth, luckily Tereshkova alerted soviet scientists in time and they were able to develop anew landing algorithm.

Who was the first American Woman in Space? 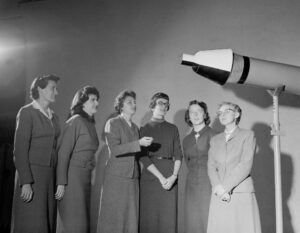 Sally Ride was the first American woman to travel to space, furthermore, she was also the first American woman to travel to space for a second time. After completing a physics degree, an English degree, a master’s in science, and a Ph.D. in physics at Stanford University, she saw an article in the newspaper inviting women to apply for NASA’s 1978 class and due to this, she decided to apply to NASA. Ride was selected as one of NASA’s first six female astronauts, she then began her spaceflight training in 1978. Initially working from the ground as a capsule communicator in 1981 and 1982, Ride then boarded her first spaceflight aboard the Challenger on June 18th, 1983.

The entire flight lasted six days and was the seventh shuttle mission for NASA. As a mission specialist aboard the STS-7, she was in charge of the operation of a robotic arm which helped launch satellites as whilst aboard the shuttle the crew’s main focus was to launch two communication satellites. The satellites were ANIK C-2 for TELESAT Canada and PALAPA-B1 for Indonesia and both attached to Payload Assist Module-D (PAM-D) motors.

Women in Space: The Journey so Far

Thinking about women in the space sector, a great deal of attention is focused on the astronauts that make it to outer space, however, influential women in the sector also populate several jobs behind the scenes from as far back as 1940.

Kitty O’Brien Joyner joined NASA in 1939 as their first female engineer working on wind tunnels and researching supersonic flight. O’Brien Joyner was also the first woman to graduate from the University of Virginia’s Engineering program after wining a lawsuit to study there amongst her all-male counterparts.

The story of Edith Gustan and her near non-existence in the history of the space sector is one that is common for women in space. Whilst you might see her name in aerospace and engineering industry journals for papers that examine subjects such as closed ecological life-support systems, in mainstream media the only appearance she makes is in the fourth paragraph of a Seattle Times article from 1970. The minuscule chunk of text is sat above a nearly full-page ad for Sears’ Mother’s Day sale advert for “incontestably female cardigans!” Despite this, Edith Gustan was a Boeing employee and biologist and was responsible for extensive research on the viability of a space-station greenhouse alongside many other collaborative projects between Boeing and NASA. Early relationships between the two companies supported by research by influential women like Edith have may have allowed Boeing to expand into the space sector. Their more recent achievements include building the Boeing X-37B military plane, which is an unmanned, reusable spacecraft with its first orbital mission being launched in April 2010 by Space Force.

Kathryn Johnson was known as a ‘human computer’ and began a career with NASA in 1953. She calculated trajectories for Alan Shepard, the first man in space, and Apollo 11’s flight to the moon in 1969. Johnson received a Presidential Medal of Freedom in 2015 honouring her accomplishments in paving the way for gender and racial equality as a black woman in STEM. She passed away at 101 years of age in 2020.

Shortly before Johnson’s career began in 1953, Mary Jackson joined NASA and was also classed a s a ‘human computer’. Jackson began her engineering career when female engineers of any background were a rarity and may have been the only black female aeronautical engineer in the field. In 1958, she was promoted from mathematician to NASA’s first black female engineer. She later became the Langley Research Center’s Federal Women’s Program Manager, leading efforts to hire and promote more women at NASA. In 2020, NASA named its Washington, DC, headquarters the Mary W. Jackson NASA Headquarters building, located on the renamed street Hidden Figures Way.

In 1958 Nancy Roman joined NASA as their chief astronomer and the ‘Mother of Hubble’ in recognition of her work to bring the vision on the space-based telescope a reality.

Christa McAuliffe also made an honourable contribution to women’s role within the space sector, being selected as the first teacher to go to space. The plan was for McAuliffe to film demonstrations aboard the mission which would be used in educational packages for students and teachers across the globe as part of NASA’s Teacher in Space project. Launched on January 28th, 1986, McAuliffe was killed in a tragic accident along with the rest of the crew aboard the Space Shuttle Challenger, after the orbiter broke apart just 73 seconds after the launch. The heart-breaking story of the accident has recently been transformed into a Netflix documentary which sits at number one on our Top 5 list of Space themed shows on Netflix, you can find out more about Christa McAuliffe and her contribution to Space by watching Challenger: The Final Flight.

Some other notable achievements from Women in Space include: