Space is for Everyone

SPACE ISN’T JUST FOR ASTRONAUTS –IT’S FOR EVERYBODY.

“Space is for everybody. It’s not just for a few people in science or maths, or for a select group of astronauts. That’s our new frontier out there, and it’s everybody’s business to know about space.”

One of the most common misconceptions about the space industry is that it is just for astronauts or the mega-rich, and that it isn’t accessible to everyone. With human spaceflight becoming more common, it’s easy to understand why people think this way. Here at EVONA, we are keen to show people that the space sector is incredibly exciting and getting involved hereon earth is much easier than you think. In fact, many of your favourite brands and products reaping the rewards of this ever-growing industry daily.  Here are just a few of our favourite examples of unexpected industries getting involved…

Thanks to GIS (or Geographic Information Systems), apps such as Deliveroo, Starbucks and Uber have utilised data from space to become some of the most popular app’s all over the world. You can learn more about GIS and its many benefits from our previous blog here.

‍Baby food – you wouldn’t automatically think that Space and baby food would be in the same sentence. However, while developing life support for Mars missions, NASA-funded researchers discovered a natural source for an omega-3 fatty acid previously found primarily in breastmilk that plays a key role in infant development. The ingredient has since been added to more than 90 percent of infant formula on the market and is helping babies all over the world develop healthy brains, eyes, and hearts through the enriched formula.

‍Wine – yes, wine. A recent study, where12 bottles of Bordeaux wine were shipped to the space station on a Northrop Grumman Cygnus cargo spacecraft in November 2019. This wasn’t for the astronauts to drink, but to study how microgravity AKA weightlessness, affects wine as it ages. The wine remained in a sealed canister at the orbiting laboratory for 438 days and 19 hours before returning to earth on a spacecraft for the all important taste test, which showed that the wine “was really maybe one to two or even three years further evolved than you would expect from the one that had remained on Earth,” wine writer Jane Anson, who participated in the taste test, told reporters in a press conference early last year. 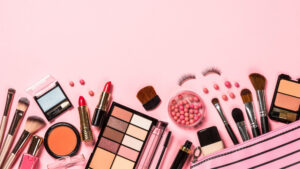 ‍‍Cosmetics – an industry which sways heavily towards women, as opposed to 29% of the space workforce. We are constantly trying to close the gender gap within the Space sector, and we hope that this shows that it really is for everyone. Estee Lauder, one of the world’s favourite cosmetics giants, flew one of their most-loved beauty serums to space and become the first beauty brand in the world to do so for an out of this world (quite literally) marketing campaign and also conduct sustainability research.

“We are thrilled to reinforce our leadership once again as the first beauty brand to go into space,” said Stéphane de La Faverie, group president of The Estée Lauder Companies and global brand president of Estée Lauder, in the company’s statement. “NASA is at the forefront of space exploration, and as a leader in skincare innovation, Estée Lauder is proud to support the incredible work NASA is doing to promote a space economy by being the second-ever commercial product to launch.”

We hope this shows you that space truly is for everyone and benefits a wide range of different industries, with more adding to the growing list every day. We are regularly placing candidates with no prior experience within the Space sector, so please do not be afraid to explore this sector if you haven’t considered it before – everybody starts somewhere.